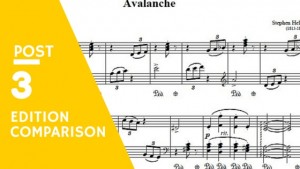 Thanks to all of you who held in there despite some setbacks in the Play Along schedule so far.  I hope you all enjoyed “getting in shape” with the Heller L’avalanche as much as I did.  I haven’t taught the piece in a while and think it’s time I insert it again into my curriculum.  Matter of fact, I have a young boy learning it this summer.  He was quite attracted to how it scampers about and he said it would be great for Halloween.  Hadn’t thought of that, but it would.  I find that many students are attracted to pieces in minor keys.  Have you noticed that as well?

Anyway, as promised, I will dispel some of the mysteries in the various editions of “L’avalanche”  with this post.  I am taking the Schott edition below (which is probably the most authoritative edition available; no urtext was found) and will perform a little cross-comparison with 4 other student editions on my desk. 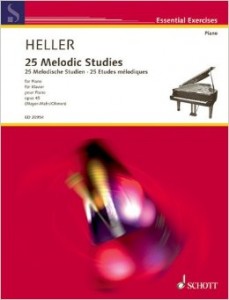 You might want to pull out your copy as you read this and make a few notes.  I think it’s easier for me to list inconsistencies measure by measure, according to a particular aspect.  Most of the editions had inconsistencies in pedaling and dynamic (accents mostly).

First, some editions did not include both rooftop and regular accents (horizontal).  The Schott edition differentiates between the two.

mm.1 -12:  Only the half notes have accents (rooftop).  The same is true for similar sections.

m. 56:  There is an accent on this downbeat, but it is a regular accent this time around, not a rooftop like before.  Found this odd, but I did see it in a couple of other editions as well.

m. 75:  A regular accent on the downbeat of the RH

mm. 10 and 12:  Strangely, there was no pedaling indicated for these half notes which made me curious.  Mistaken omission?  I might  pedal as in mm. 1- 8.  3 of the 4 editions added the pedal.

mm.13-14:  This is indicated to be played portato without pedal. Almost all editions added pedal here.  If I added pedal, it would only be a speck.  For sure I’d want to keep the chords from blurring together.

mm. 34-36 (and similar sections):  This section has no pedaling indicated, though many editions added a pedal for each chord of the RH.  I would probably add it for warmth and assistance with the cresc.

mm. 44 – 46:  No pedaling is indicated here, but most editions added it probably so it would match the indicated pedaling in m. 47.

mm. 69 and 71:  There is definitely pedaling indicated for each of the two chords here.

mm. 85 – 89:  Believe it or not, these last few measures should be held under one long pedal.  Some editions did include it and some removed the pedal indication entirely. It’s a 19th century thing.  I’d do it.

m. 82:  One of my editions included this measure on the final system.  Sure made it easier to read the upcoming LH quarter-note entrance on “A.”  Other editions weren’t so friendly. 🙂

Hope this revelation into the Schott edition helped.  Will be in touch soon regarding our next summer Piano Play-Along topic.  I’m away from July 2-16 presenting at teacher conferences and workshops.  I’ll post where I’ll be and if I’m in your neck of the woods, stop by and stay “hi.”  I’d love to meet you! 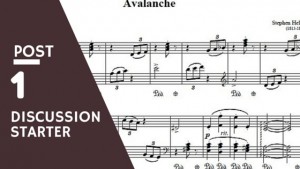 Welcome to the first GET IN SHAPE Piano Play-Along!  with L’avalanche, Op. 45, No. 2 , by Stephen Heller (1813-1888).  For more information on this play-along and how to get started, click HERE.  You may join in anytime and reply with comments even after June 15, the day we all chime in with our thoughts about this gem.

A little discussion-starter here to get us going…..

This particular etude is probably Heller’s most popular from his sets of etudes — Ops. 45, 46, and 47, which all stem from the year 1866 when he was at the height of his career.  His etudes are actually character pieces at the intermediate level and students love to play this one because of its high energy and showy style.  Most of Heller’s etudes bear titles, though it is unlikely Heller supplied them.  Generally, publishers added them at the time of publication. END_OF_DOCUMENT_TOKEN_TO_BE_REPLACED

Welcome to the GET IN SHAPE Piano Play-Along!

First, thank you all for submitting your votes for a summer Play-Along topic.  The majority of folks voted on getting their fingers in shape for now, but not to worry… we’ll cover the other Play Along topics later this summer. 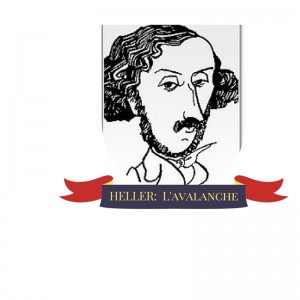 FROM JUNE 1 through JUNE 15, we’ll be practicing Stephen Heller’s “L’Avalanche.”  Click HERE for all the info you need to get started and learn about the purpose of this particular Play-Along. END_OF_DOCUMENT_TOKEN_TO_BE_REPLACED 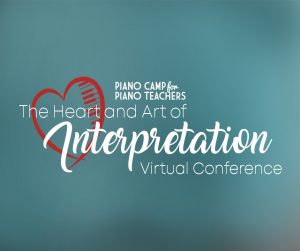 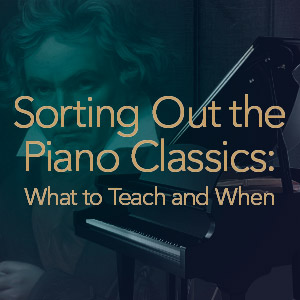